Why flagging in Hinduism SE is not as per other SE Sites?

I see many "thank you" and "welcome to Hinduism " kind of comments in this SE Site, below both question and answers.

And it is expected on SE Site that (AFAIK) , if you find such comments that don't add any value to the question or Answer, it should be flagged appropriately.

From my experience in last 3-4 months in this Hinduism SE is that when I do flag such comments which are eligible for "too chatty" or "not constructive", they are almost always ignored by the moderators and are mostly REJECTED.

Here is one such example: Rishi converts poor dog to lion and then to dragon which tries to eat the Rishi

I am attaching the Screenshot of my declined flags so that anyone can visit the Link and see it on their own and decide if it is valid to remove those comments or not. 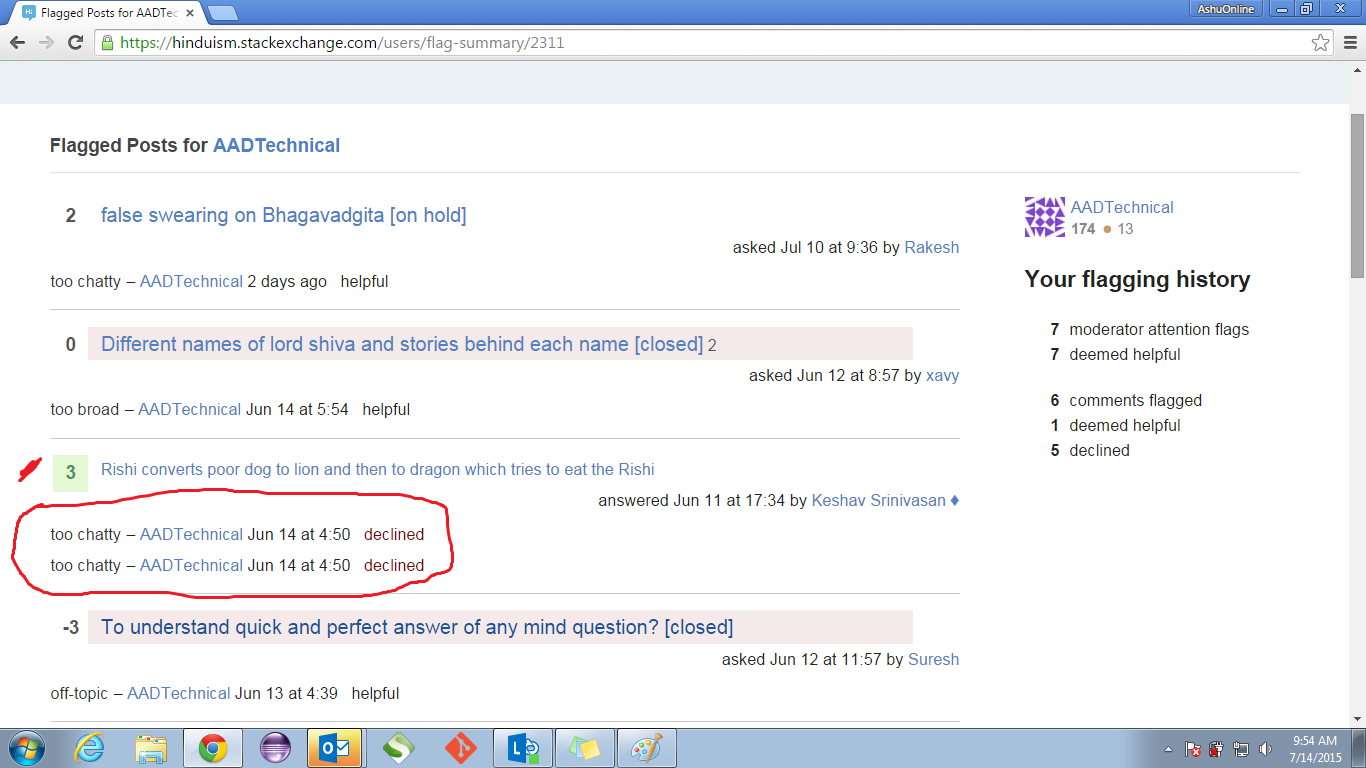 I flagged first 2 comments below the Answer as "too chatty" and one of them is from Hinduism site's moderator and both are declined, most likely by the same moderator as he is the only ACTIVE Moderator AFAIK from last 3-4 months on this site and I am not alone who thinks it this way. Below is the quote and the link:

This particular moderator is over-zealous and unfair and seems to be the only active moderator which means that all decisions are unilaterally conjured up and implemented.

Voting to have Keshav Srinivasan take a sabbatical as a moderator

And I am almost 100% sure that the same moderator is going to answer this question too!!

I do have fair record of raising helpful flags on other SE Sites such as stackoverflow (as of this writing I had 281-helpful flags on SO),and hence I do not need teaching/training about flagging and although SO is programming related site, mostly I do flag things such "thank you" kind of comments.

But I can clearly see, that this Hinduism site is not following those rules of flagging or has entirely different rules which just allows "thank you" kind of comments to just hang around without cleaning.

I understand that this Hinduism SE is still in Beta and participation is low compared to other more mature SE Site, but that is not an excuse to have junk all over the place by new users.

Why flagging is not as per general SE Site here in Hinduism SE?

Let us talk about the flag system first. I checked the flag history of the post which were flagged by you and it seems like they were declined by @Keshav. Now lets not play the blame game here because even moderators are humans. Indeed it's pointless to preserve such comments and I thank you to point that these flags were declined instead of approving them as helpful.

I had a talk with him and I don't think this should repeat henceforth, incase if it does, you are always free to raise an issue.

Coming to activeness of moderators. Since the site had started we were having issues for moderator activeness

Where are our two pro tem mods?

Later on we decided to elect Keshav Srinivisan as our fourth moderators as he was well informed as well as active. We still have inactive moderator crisis but I used to feel the same but not anymore. If we see, the amount of activities going on here are very less compared to other Beta sites. Moderators are not the only one who should be active to keep the site in good shape.

We can always help closing off-topic questions faster or handling flags and taking appropriate actions but I feel that users of this site should drop in and contribute as well. For example if I take consider your revisions. It shows you've made 7 revisions, I further investigated and saw that out of these 7, 5 of them were on your own post. So you visited 143 days you have 2 revisions.

I've no intentions to blame here but am just representing the statistics that though every site has moderators, its also the duty of other users to keep the site neat and tidy. This is the reason SE allows you to edit the posts and make the grammar better, review edit suggestions, close queue and so on.

About me, I am still one of the active user on this site, its just that the flag handling has changed a bit. I have stopped handling flags(most of the time) if the flags are on answers which say wrong and similar. I let Keshav decide to handle them as he is well informed than me. I usually used to handle other flags to keep the community clean but if they are flagged on night UTC +5.30 and if they are handled by other moderator there's not much other mods can do except for going around and searching for those comments and getting rid of them which I often do.

Conclusion: Your point is completely valid that those flags shouldn't be handled the way they were and I've discussed with other mods about it. Unfortunately we cannot turn your declined flags to helpful but I will assure you that flags will be handled wisely henceforth. Sorry for the inconvenience again.

Let me respond to your points one by one.

I see many "thank you" and "welcome to Hinduism " kind of comments in this SE Site, below both question and answers.

Yes, and I think such comments are fine. It's fine for the person who posted the question to have a brief note of appreciation. What's more discouraged are "+1" or "Me Too" comments, which have the potential to clutter up comment sections. But since there's only one OP, a note of thanks won't really clutter things up.

As far as "welcome to Hinduism.SE!" comments, I think that should be encouraged. Even a small amount of politeness to a new user can make them feel more at home.

And it is expected on SE Site that (AFAIK) , if you find such comments that don't add any value to the question or Answer, it should be flagged appropriately.

Yeah, flagging is certainly encouraged, and when comments are cluttering the comment section without adding any value, then it would be a good idea. But that doesn't mean that "small talk" must alwats be deleted as soon as it's posted. We're a community, and it's OK to have some informal communication here and there and then delete it after some time when it clutters things.

Well, if you had flagged those comments now, I probably would have deleted them. But considering that it was only a couple days after they were posted, I probably didn't think it was necessary. A note of thanks from a questioner isn't particularly egregious, and there's nothing wrong with welcoming a new user to the site. Deleting a welcome comment would be premature if the user hadn't seen it yet.

I understand that this Hinduism SE is still in Beta and participation is low compared to other more mature SE Site, but that is not an excuse to have junk all over the place by new users.

Well, we certainly encourage users to flag when there's junk comments on the site. Your flags may not always be approved, but flags are taken seriously here and are highly appreciated. Note that a bit of leniency in a site like this is more tolerable than on a site like StackOverflow, so comments have less of a potential to clutter the site. But I agree with you that that's no reason to leave up junk that adds no value.

Not the answer you're looking for? Browse other questions tagged discussion moderators flagging .

15
Define Off-Topic Close Reasons
9
Voting to have Keshav Srinivasan take a sabbatical as a moderator
8
Where are our two pro tem mods?
11
Change the moderators of Hinduism SE Site
10
Create the on-topic (page) for this community

9
Voting to have Keshav Srinivasan take a sabbatical as a moderator
11
Change the moderators of Hinduism SE Site
7
Guidelines for when to use “Chat” instead of “Comment”
8
What exactly is a “wrong answer”? What is the official policy on handling wrong answers?
5
Can the mods go easy on declining flags on old unsourced answers?
5
What is the correct reason to use when flagging one/two liner answers which are without any sources?
9
Should we elect new moderators?