Can someone still be considered an authority figure when their view is opposite to that of scriptures?

When I had asked if moderator's position towards new age gurus has evolved then one of the moderators replied all Hindu Gurus and Acharyas are allowed given they don't go against very core ideas of Hinduism.

In my mind this statement is a bit broad. How do we define what is a core or peripheral?

Secondly does the new age guru/popular personality ceases to be considered as a valid source on HSE if his views on a given topic are opposite to that of scripture. For instance lets take the following case 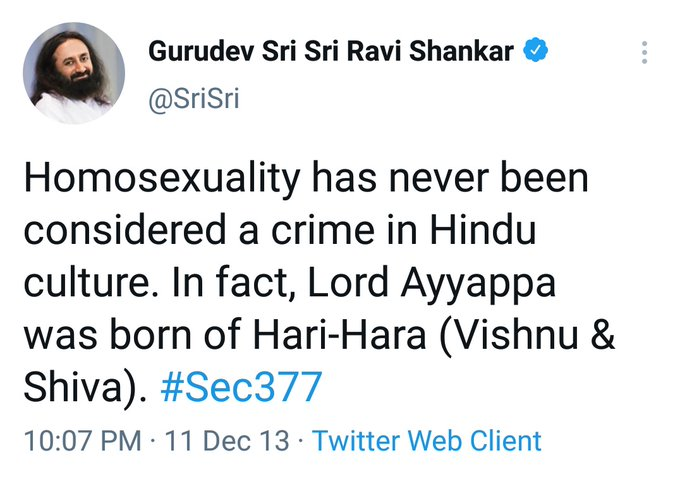 Now we know from this answer that homosexuality is a sin as per dharmashastras. (Not delving into his second statement on Harihara as first one is sufficient)

In my mind a person's word can no longer be considered authoritative/gospel truth the moment his words/views on any subject can rejected on basis of scriptures.

What about personalities who admit that they've never read scriptures ?

Hindu Gurus of all Sampradayas are allowed. As said in this answer, these Acharyas might interpret some social norms differently but they all adhere to core beliefs, like Apaurusheya of Vedas. Some of core beliefs can be seen from this answer. Although list of core beliefs changes with different acharyas, many common beliefs like believing in Vedas, reincarnation can be observed. For instance, Sri Sri says,

Every sound has a certain effect on the consciousness. For example, when we hear some pleasant music, it calms us. Other types of music make us get up and dance - even without knowing the meaning of the lyrics! In the same way, the ancient sages, called Rishis, going deep in meditation, researched the effect of different vibrations on consciousness. Assimilating these different sounds, perceived in deep meditation, the Rishis came up with mantras, which have a specific impact on consciousness. During Navaratri, various homas are performed and mantras are chanted which have a harmonizing impact on the consciousness, as the Rishis described in the Vedas.

These seer-scientists were called 'seers,' because they 'saw' the knowledge. They did this by going into deep meditation and quieting the mind. In such a state, the Rishis could understand the characteristics of the forces of nature. Their calculations and mathematical methods are accurate even today. Thousands of years ago these seer-scientists had already described many things, which Western science has discovered only in the last few centuries – an example being the description of molecules and atoms. Observing nature, the Rishis could describe the energy or consciousness that is pervading this whole creation. After passing on their knowledge orally for generations, it was finally written down in four main scriptures of the Vedas.

His views on core scriptures Vedas are in accordance with tradition. Swami Vivekanada here gives different list but we can see many common things like belief in Vedas as truths, existence of an entity which is eternal and all pervading.

Obviously different acharyas or Gurus have different opinions on topics like Varna Dharma, homsexuality and they do propose their views only after interpreting scriptures.

So, in short we can allow Hindu acharyas and even Scholars or Indologists if they don't (list is not exhaustive),

10
Who all are authority or qualified to post an authoritative opinion on religion, spirituality and Hindu Dharma?
5
Has the position of moderators towards new age gurus evolved?

3
Is it needed to add something from our end when Question can be answered directly from Scriptures without any explanation?
1
What citation standards are expected of Questions?