How should the community deal with such behaviour?

After OP asked this question [mirror], it was closed. OP edited [mirror] the question and added the text "[opened]" in the title.

Adding [opened] on your question's title won't open a closed question. It needs to be voted by privileged users to open a post again.

@Serverus Snape I know that much. It was just for fun. So that it looks funny n symmetrical. I like symmetry. So that was me being funny. U should also do that man sometimes. N I don't need it to be open I don't care also I was just here for timepass due to lockdown n it also helps me in learning abt shastras that's it dude n nothing else. 👍

How should the community deal with such behavior?

They should be banned. Adding "[opened]" in the title is cheating/lying. They are exploiting the tools on the site (the edit feature) to deceitfully give the impression that their question was opened when it was not.

The OP even admitted his deceit:

I know that much. It was just for fun.

Then he is encouraging other users to violate the site rules:

U should also do that man sometimes.

What is his justification for this immoral activity?

So that it looks funny n symmetrical. I like symmetry. So that was me being funny.

So, it looks like he doesn't care about the site rules. He is fine with breaking rules if he finds it "funny" and "fun".

The OP is also an adult, not a small child, so his behavior is even less excusable.

Disclaimer: This is a general attempt trying to highlight mistakes from our end when discussing with other users.

I am trying to compare programming SEs with religion SEs here. My intention is not to harm anyone but attempt to explain to everyone what I think is happening here.

In any programming SE,

Now, the same model can't be applied to religious sites. Because, with respect, people respectfully believe something but don't know it. Even if they know it, they can't prove it to others (everyone knows this). They believe that dearly close to their hearts.

Though the religion of most of the users is the same, their beliefs differ based on the scriptures or sutras they read or gurus they follow. There is a high possibility that the questions or answers here contradict a person's or people's beliefs.

What the community can do?

How this applies to the discussion here?

From the "be nice" page: 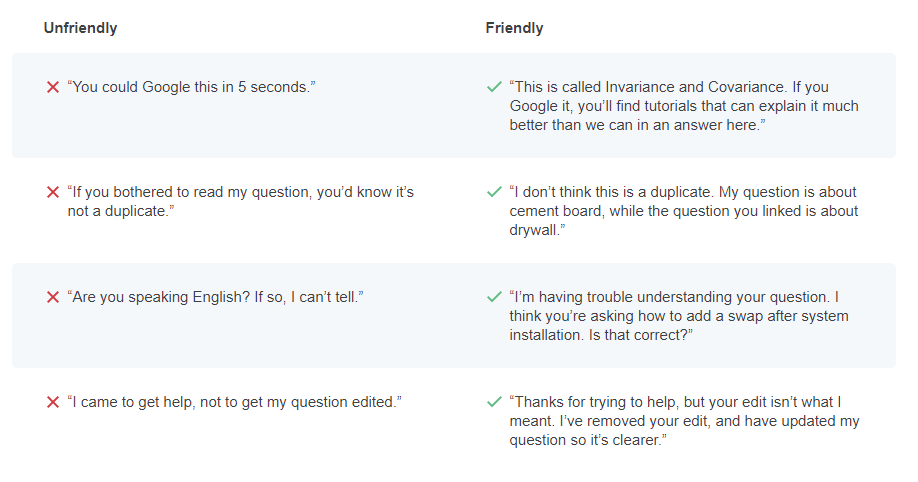 8
A small suggestion to be considered before sharing personal info
2
Can this answer be made objective, clearly marking sectarian views as sectarian?

10
Users should make use of their privileges
11
The Inmates are Running the Asylum?
15
Define Off-Topic Close Reasons
4
Why was my question closed? What exactly is an "opinion-based" question on Hinduism.SE?
1
Why was my edit rejected?
3
In what scenarios 'Community' user cast a close as duplicate vote?
1
Do meta questions have a quality standard?
14
2021 Moderator Election Q&A - Questionnaire
13
Is posting several "trivial" questions in bulk encouraged for the site ? What’s the solution for it?