What should be on the moderator candidate questionnaire?

NOTE: The questionnaire is now up

Please post answers below that contain a question you would like to have moderator candidates answer. Since this is abbreviated, we'll take the top 6 answers for a separate question for candidates to post to.

How would you handle flags on old answers with too many up-votes but lacking valid sources?

Suppose that we are working on fabricating or refining a site policy and we have one meta discussion post for getting community consensus for making decision on that particular issue. Now what will you do if you find that community is divided over a certain decision? e.g. around half of the users voted in agreement and half on opposite side which creates controversy/difficulty in concluding the matter. In other words, as a moderator, how do you solve such a controversial issue for which community is divided over a certain decision?

How would you handle arguments (as comments or in the chatroom) because of different beliefs among the users? (irrespective of flagged or not flagged)

How would you deal with a user who produced a steady stream of valuable answers, but tends to generate a large number of arguments/flags from comments?

How would you handle a question/answer which is on-topic but vaguely presented and hurting the sentiments of (a) some users and (b) many users?

When you spot a non-constructive comment (occasionally with some upvotes) yourself which no one has flagged yet, how will you handle it? Will you wait for sufficient 'unfriendly or unkind' & 'no longer needed' flags before taking action?

What is your take on the answer that provide quotes from the modern experts, which are clearly against scriptures?

How would you handle a situation where another mod closed/deleted/etc a question that you feel shouldn't have been?

In your opinion, what is the biggest problem/challenge Hinduism Stack Exchange is currently facing? How would you propose to solve it?

In a situation to close / open a question, when would you consider casting your vote :

Assuming you are online during the whole situation.

The former would close / open a question immediately. The latter would make you equivalent to a user having close/open privilege.

Though main task of mod is to handle flags, but will you be active in chatroom and meta?

What would be your plan for unanswered questions pending from long time?

On one hand the site is trying to graduate; on the other hand some activities like answering in comments shows the site still wants to remain in beta.

Some graduated sites have a strict rule to not allow pseudo-answers in comments.

How do you think comment-answers should be handled on this site?

Also, today, if someone were to flag a comment-answer as It's no longer needed., how will you act on it? 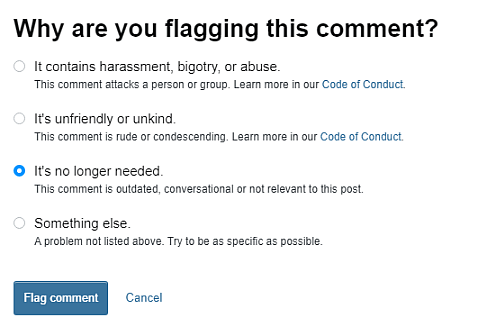 How do you deal with the users who strategically try to mislead the site with their answers by pushing pressure points with their biases?

As a moderator, how would you handle a Not-An-Answer (NAA) flag on a Q&A of this type:

Question: I'm looking for arguments in favor of theory A or support philosophical position A.

Answer: Theory A is wrong and has long been debunked.

Here are the reasons why it's wrong:

A reader who probably does not care whether Theory A is right or wrong looks at both Q & A and flags the answer as NAA thinking that the answer doesn't really address OP's question.

How will you handle this flag? Mark the flag helpful (and take some action) or decline the flag?

How do you plan to deal with users who use labels such as 'anti-scriptural', 'anti-Hindu', 'Marxist', 'Leftist', 'Asura', 'Abrahamic', etc. to target those that don't conform to their views?

Also, despite several clarifications by ex-CM's, some users continue to believe this is a 'pro-Hindu site' as opposed to a 'site about Hinduism'. Some of these users have appointed themselves as flag-bearers of Hinduism on the site and want to censor views they don't agree with even when those views are backed with sources and citations. While these users are free to believe that every single word written in Hindu scriptures is literally true and express their views in answers, they don't stop at that, they want others to "fall in line". They are busy policing OP and other users in comments, giving unsolicited advice on whether one can chant mantras or not, whether one can read the Vedas or not, etc. They don't believe in live and let live.

How do you plan to deal with users who try to force their views and opinions on others?

12
How do we want to handle discrepancies between belief systems on this site?
15
2021 Moderator Election Q&A - Questionnaire