Is such insult of Rishis (the authors of Epics and Puranas) tolerable?

The details of this primitive war have been in like manner exaggerated beyond all credibility. The leading warriors, whilst fighting with all the bloodthirsty desperation of savages, and burning with all the frenzied wrath of demons, are endowed with superhuman strength and skill which raise them to the rank of demigods.

Magical weapons are employed which are said to have been received from the gods, but which could only have existed in the wild imaginations of Brahmanical bards who were totally ignorant of the practice of war.

The above quote is taken from this answer here: https://hinduism.stackexchange.com/a/38004/4732 This is some historian giving his opinion about the Mahabharata war. He is calling the author of the epic (Rishi Vyasa) ignorant and accusing him of spreading false stories which are only wild imaginations (of the Rishi) according to the historian, besides of course calling the Rishi just a bard (a story teller).

Are users here okay with such insult of Hindu scriptures, Rishis, which/who are considered as authority on this site? Should not the answer be deleted?

Apart from insult being morally wrong, more so it's actually self contradicting. They themselves define Hinduism with its practices, yoga-s, laws, etc. Insulting them in the name of "Hinduism" on "Hinduism Stack Exchange" is self-contradicting & implies collective cognitive dissonance.

Insulting them here is somewhat akin to develop a stage [HSE] to perform a drama [Hinduism] where the theme & storyline of the drama [Content of HSE] is in insulting the same drama that's being performed conspicuously. Whatever you follow after insulting & purging authorities of Hinduism from Hinduism isn't actually Hinduism, It's something else. Wherefore, whatever is being followed here after insulting authorities followed by purging them off isn't Hinduism, so acts of insulting them should ideally be off topic.

Let their insult be unanimously shunned from ourselves; let them insult each other (as it seems in rivalry among various schools), for they are achaarya-s or rishis, but we are neither achaarya nor rishis to insult them.

Even if there is some apparent or obvious difficult work of an authority, then it has be assiduously contemplated upon & discussed in sustained way with faith than to outrightly insulting the work & the author. Insult is counter productive, it doesn't bring any further conclusive truth before us.

Yes, it is tolerable the same way we tolerate Swami Vivekananda who said pretty much the same thing about the writers of Smṛtis and Purāṇas in a different context:

The Smritis and the Puranas are productions of men of limited intelligence and are full of fallacies, errors, the feelings of class and malice. Only parts of them breathing broadness of spirit and love are acceptable, the rest are to be rejected. The Upanishads and the Gita are the true scriptures; Rama, Krishna, Buddha, Chaitanya, Nanak, Kabir, and so on are the true Avataras, for they had their hearts broad as the sky — and above all, Ramakrishna.

The above is already quoted in a few answers:

Is Swami Vivekananda an authority on this site? Would it make you feel better if I replaced one of my citations with the above?

Can I cite Swami Dayananda Saraswati on this site? Is he an authority? Speaking about weapons like Brahmāstra that can be launched out of thin air, he said:

The way I see it, you don't have a problem with Hindu gurus criticizing Hindu scriptures and their authors but with historians criticizing them. The more Western these historians are the more problematic it is for you to digest some of the things they say. So, instead of responding to their criticism in a mature way, you want to ban and censor them.

To those trying to delete my answer for all the wrong reasons, I strongly suggest they refrain from doing so. Remember that it only takes 3 votes to undelete it. Also, we really don't want to get into a situation where we start downvoting and silently deleting each other's answers by inventing arbitrary reasons when the real reason is that we don't like certain answers/references and we somehow want to censor them. 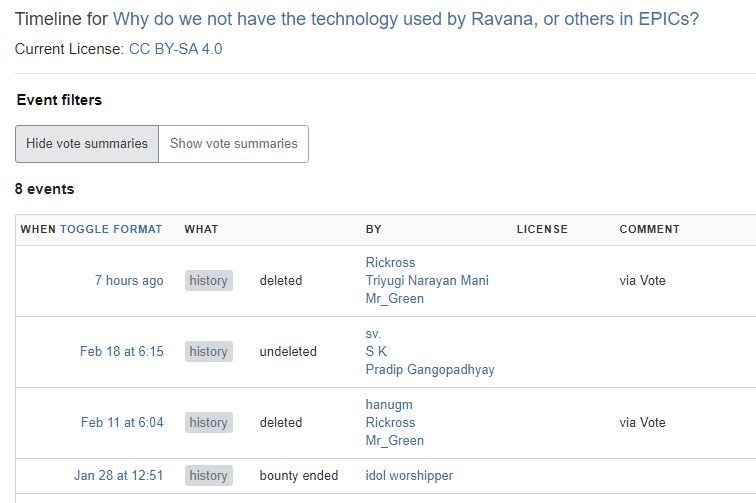 I don't see why posting an opinion critical of Rishis should not be tolerated. This site should allow posts of all possible opinions. The only time a post should be deleted is if the opinion posted is demonstrably false.

Reading the comments it seems to me that in this site no modern secular scholars can be quoted. This should be made clear. Merely saying that the opinions of Gurus, Acharyas etc are allowed will not suffice. It should also say clearly that the opinions of modern secular scholars are disallowed. This will certainly restrict the scope of this site but clear the confusion. I thought that this site allows all opinions except for opinions based on false facts.

12
Who all are authority or qualified to post an authoritative opinion on religion, spirituality and Hindu Dharma?
23
What kind of references are valid in answers? Are modern works allowed?
6
Are Irawati Karve's books/works valid references for answers on this site?
3
How to deal with answers that are against scriptures or scriptural statements based on opinions of (modern) experts

5
How to deal with comments which are disrespectful towards Hindu Rishis, beliefs, gods?
4
what's the difference between frequent tab and active tab
7
Given any user- how to find out all such tags for which he/she is the top user?
7
How should the community deal with such behaviour?
5
Should this bounty be canceled and returned to the user?
5
Is Logic and Science really off topic for Hinduism Stack Exchange?
7
On the Community user voting and commenting on posts