We can find plenty of answers and comments suggesting that the scriptures or the statements of scriptures are not true. The basis for their answers are from the opinions of historians, archeologists, secular experts etc.,. And it is important to note that such opinions are not scientific facts.

We can keep comments aside and this question only deals with such answers only i.e., the answers containing statements, which are not established facts, and are against scriptures.

#1: Brahmastra is just a myth because an expert archeologist opined so.

#2: Many statements of scriptures are false since they are not happening today. etc.,

Since some of the members may support such answers, the answers get upvotes and then causes harm to our main site. Harm is because of the reason that our main site runs primarily on scriptures only.

In concise, if an answer is directly contradicting the (statements of) scriptures based on expert opinions. How to handle them?

This is not a new problem, and neither is its solution.

Sama - Diplomacy. Reason with the naysayers that there is no un-falsifiable claim in Vedas. If you are unable to verify the results of an yagna, the fault lies with you.
Did scientists doubt Einstein for the past 100 years about the existence of black holes, and give up on finding it saying "Einstein is an old outdated fool"? No, they persevered until it was proven recently.
If 100 years of global work is needed for some ordinary material/Prakriti knowledge like black holes, a million lifetimes is needed for knowledge of Bhagavan

Dana - Donate. Give them small wins, like fame when they donate to temples, knowledge when they listen to upanyas/pravachan etc.
The punya of these good acts will automatically change their nastik character.

Bheda - Difference. Show them that their belief in today's doctors/scientists/wikipedia is exactly the same as our belief in rishis/acharyas/shastras. That attacking faith of one is same as attacking faith of another.
Not everyone has time/energy to verify every single claim, whether they are scientific or religious, so we choose to believe those whom we trust.

Danda - Dishoom. Ban the repeat offenders like we did with SK

We can find plenty of answers and comments suggesting that the scriptures or the statements of scriptures are not true.

You are overgeneralizing. This site has about 14,000 answers and I think there are only a dozen or so answers that fit your going against scriptures criteria.

The basis for their answers are from the opinions of historians, archaeologists, secular experts etc.

You are forgetting answers like these that cite one traditional text/commentator speaking against another text/philosophy: 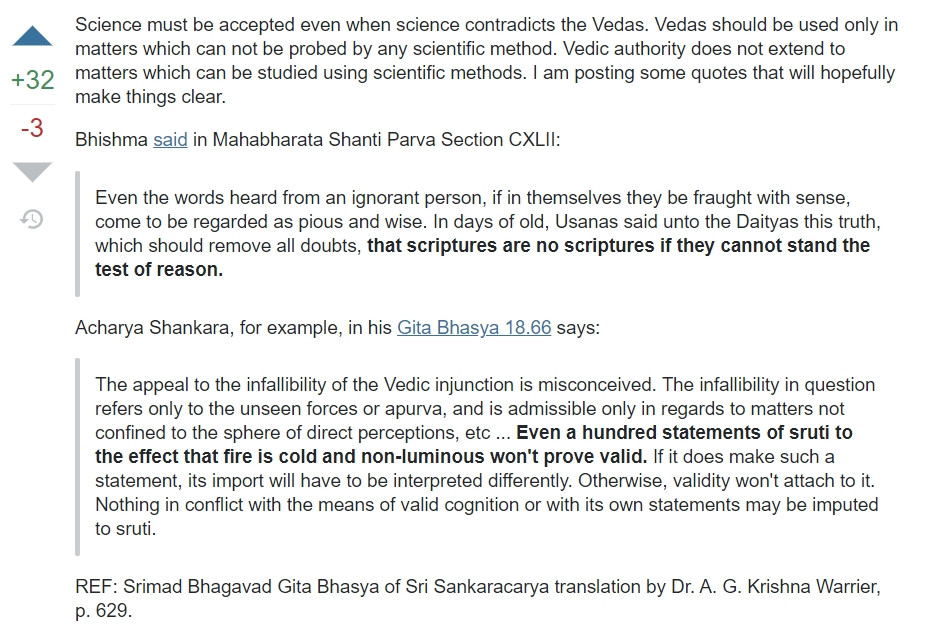 Given the current environment on the site where people are easily offended by the use of mythology tag, it must come as a surprise to a new user as to how the above answer received 32 upvotes. The only reason I can think of is, this was posted in the initial days of the site when the majority of users knew how to keep religion separate from science and voted based on the strength of the arguments made in answers keeping their personal beliefs aside.

And it is important to note that such opinions are not scientific facts.

Do they become scientific facts if the same thing is stated by a guru or an acharya?

E.g., speaking on kings who are supposed to have lived for 1000's of years, Swami Vivekananda said:

As for weapons like Brahmāstra that can be launched out of thin air, Swami Dayananda Saraswati says:

Seems like your main issue is not with opinions of historians and secular scholars but with anyone who argues against something stated in Hindu scriptures even if it doesn't agree with reality. In your view, Vedas, Puranas, etc. are beyond reproach, so any answer or comment that challenges them makes you uncomfortable. You are not content with downvoting and attempting to delete such answers but you also want to ban the sources cited in those answers even if they are directly answering a question. This line of thinking is against SE rules. I suggest you read these posts:

In concise, if an answer is directly contradicting the (statements of) scriptures based on expert opinions. How to handle them?

The same way you handle opinions of Vivekananda and Dayananda, by allowing them.

Not the answer you're looking for? Browse other questions tagged discussion scope .

12
Who all are authority or qualified to post an authoritative opinion on religion, spirituality and Hindu Dharma?
12
How do we want to handle discrepancies between belief systems on this site?
14
Is such insult of Rishis (the authors of Epics and Puranas) tolerable?
0
If all answers are only perspectives, why are some users trying to delete answers they don't like?

3
Why was my question closed? What exactly is an "opinion-based" question on Hinduism.SE?
23
What kind of references are valid in answers? Are modern works allowed?
8
How should we handle answers with partial scientific speculation and/or partial answers which are not from Hindu perspective?
3
How does this site deal with statements which are repeatedly made without references?
4
How to deal with comments which are disrespectful towards Hindu Rishis, beliefs, gods?
2
Facing misleading blogs, articles, texts that contradicts actual texts