Why is this question opinion based when there is already a precedent on the site for asking such questions?

My question here, which is "Why does the Manusmriti have verses discriminating against Brahmins?" is being voted to close because it is "opinion based".

However, this question asking if "Hinduism is a bit partial to kshatriyas" is not closed as opinion based and is even highly upvoted.

Then there is this question asking "why killing people of other castes is not a sin", which first of all is false, and second of all, the OP writes this comment:

That made me wonder why god or whoever created us would say something like that? I mean killing or beating any living being is a sin, then why is it written explicitly for Brahmins?

Sometimes I feel like all the scriptures written by Brahmins are biased toward Brahmins?

This question got highly upvoted (whopping 12 gross votes). So, such comments are acceptable on this site.

So what is wrong when I write comments like this in my question?:

This is discriminatory and against human rights. Why is the scripture so unfair to Brahmins that it prohibits them from having a simple beer?

Then this question asking about the "Manusmriti as a source of controversy" is clearly opinion-based and also received no downvotes and only upvotes.

Then this question asks if "some verses of the Manusmriti are added later". Interpolation can't be answered from scriptural citation so it's an opinion.

The question "Is it permissible to deny the authority of the Manusmriti" is opinion based, and is highly voted.

Even my own question asking if the "Manusmriti was written to favor a particular class" was highly upvoted and not closed as opinion based.

Rather than objecting the things, if the nature of question shows that one wants to understand the things then I think it would be received/taken well by the community. For example, some of the questions you've linked ask "Is it so?" instead of objecting "why is it so?" Though it is not necessary that every question of later type would not get positive feedback.

You've also tried to alter the title of question but if you observe the body, if you are stating:

This is discriminatory and against human rights.

Which looks like there is no room for explanation since you've already supposed or made an assumption that the verses are discriminatory; further the question continues objecting scripture:

Why is the scripture so unfair to Brahmins that it prohibits them from having a simple beer? Sometimes I feel like all the scriptures are written by Shudras and are biased toward Shudras.

Objecting a practice or doctrine is different from objecting a scripture. When you object a scripture, there are chances you may get negative feeds.

So, if you revise the question, it may be reopened by community voting.

Even though you fixed the title, the question still has lot of opinion-based content:

Why does the Manusmriti have verses discriminating against Brahmins?

This is discriminatory and against human rights. Why is the scripture so unfair to Brahmins that it prohibits them from having a simple beer?

I suggest removing all these unnecessary speculations. Make it a simple objective question (figure out what it should be) that can be answered with references.

Also, you cite a few verses yourself which should belong in an answer:

A twice-born person, having, through folly, drunk wine, shall drink wine red-hot; he becomes freed from his guilt, when his body has been completely burnt by it. — (90)

‘Red hot’— Though the text uses the word ‘varṇa’ colour, yet it is mere heat that is meant; as is clear from what follows, about ‘the body being burnt.’—(90)

If you attempt to self-answer in the question itself, it's not a good question for the site so it will be closed under a different reason ('needs clarity'): 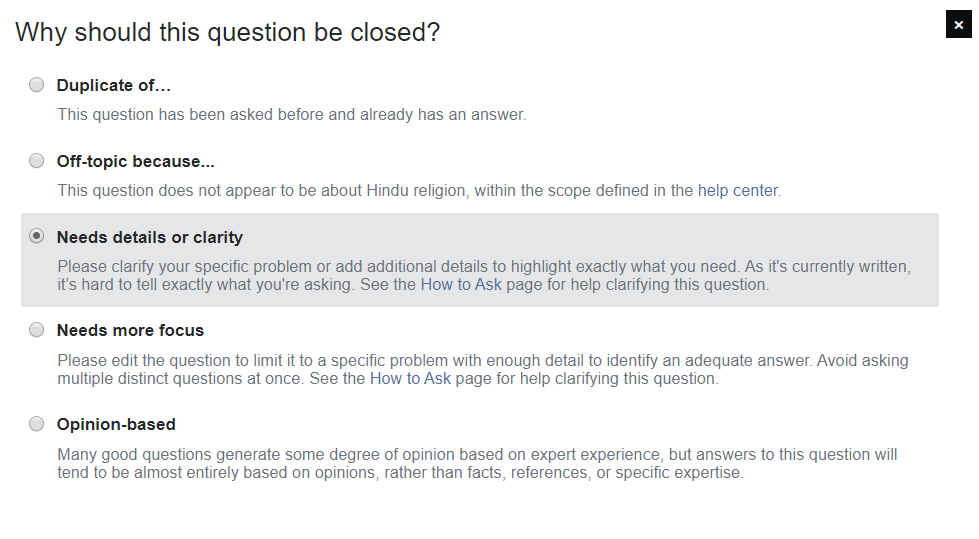 Also, in this case, your goal was probably to start a discussion under comments about what other users thought about your new discovery; it was never really about finding an answer to a question.

In future, before posting a new question, please step back and think what kind of answer (with references) would make a good answer to your question.

You would prefer that the moderators close it ? :-)

On a serious note , I do get the drift. It is indeed unfortunate that folks who are voting to close don't believe that casteism is undoubtedly a product of society and not religion. If they believe and still want to close then I feel the other older questions mentioned are to be revisited irrespective of their upvotes.

This question is not opinion-based because it has an answer. Brahmanas are supposed to be pre-dominant in sattva guNa, hence any transgression by a brahmana can be treated as a greater "sin". Hence, punishment is harsher. Of course, all this assumes that guNa determines varNa.

That said, the above statement is probably unnecessary.

8
How much of cross religion questions should we allow?

4
Why was my question closed? What exactly is an “opinion-based” question on Hinduism.SE?
2
I want to ask a question on home buying vs. renting - how should I frame a valid question?
4
Why the names of the members, who opted for closure of my question, are not visible to me?
1
Questions asking whether something is an interpolation are opinion based and not appropriate for this site