Why answers are being deleted by moderator?

So recently I answered this question: What was Madhvacharya's argument against the Shaktas? which was asked by one of our Moderator. I am sure I didn't receive enough flag for my answer, but this Mod deleted my answer, Ref: Screenshot. 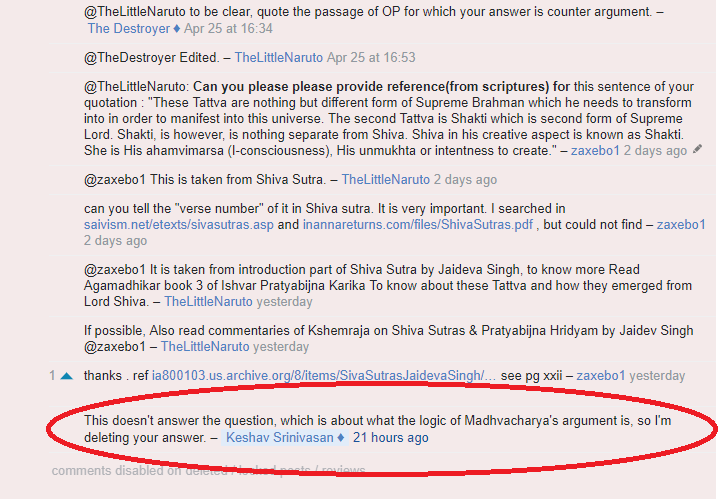 There was one more answer to this question, He deleted that as well. My doubt is, why he himself deleting answers on post, why he just doesn't wait for enough flags ? Why he doesn't respect SE community tools and rules? Why he is making all decisions on his own ? Just because he is a moderator, He should abuse his privileges ?

I'm surprised that you have raised answer deletion issue on meta. I thought you know that answer will be deleted.

Here's the first half of the screenshot. I think that will help understand why the answer was deleted. 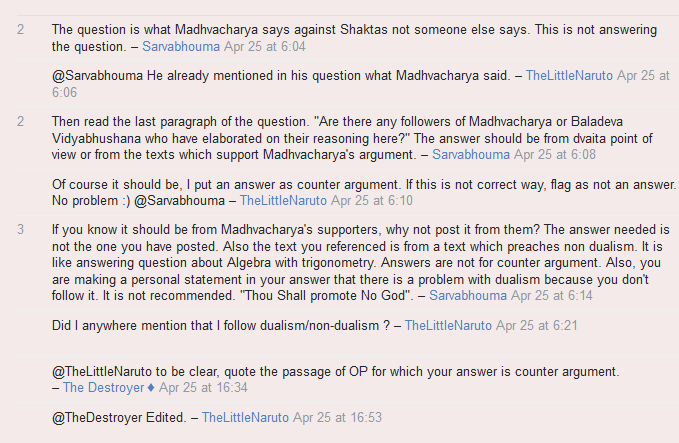 I explained that your answer is not addressing about Madhvacharya's logic about Shaktas. Your answer was explaing what Shiva Sutras say about Shakti which is not asked by the author of the question. The answer should be given from the point of view Dvaita philosophy but you have referenced from a text which teaches non dualism. So, it is completely unrelated.

You also agreed that the answer should be addressing what Madhvacharya or his followers said about Shaktas and asked me to flag the answer as NotAn Answer.

Of course it should be, I put an answer as counter argument. If this is not correct way, flag as not an answer. No problem :) @Sarvabhouma

Answers should not be counter argument to the question. If someone posts a question on "How does Acharya Abhinavagupta prove that there is no difference between Paramatma and Jivatma" and a user posts an argument of Madhvacharya how there is a difference between Jiva and Paramatma, that is definitely not an answer because the question asked for something and answer provides something else. In Shog9's words, question asks for apple and you give an orange.

Moderator also gave reason why the answer is deleted.

This doesn't answer the question, which is about what the logic of Madhvacharya's argument is, so I'm deleting your answer.

Now answering your questions one by one,

I am sure I didn't receive enough flag for my answer

There are no enough flags for Not an answer. It will be the same if there are 10 flags or a single flag. Only spam and Rude/Abusive flags have enough flags. 6 red flags are enough to delete a post. It's not the case for NAA flags. Flags do not delete an answer, votes do. 3 delete votes from 20k users (4k on beta) or 1 delete vote from a moderator are necessary.

Moreover you don't know if users have flagged your answers or not. But in your case, there was at least one flag which put your answer in "Very Low Quality" queue. Two users gave review as "Looks OK" (Wrong reviews.. please give accurate reviews users..) but doesn't look OK according to the site rules. There are upvotes to the comments which I posted that the answer doesn't address the question. So, I assume there are other flags on the answer too.

Why he doesn't respect SE community tools and rules? Why he is making all decisions on his own

I don't see any violation here. A moderator should be independent and take their decisions on his own. That is why there is a diamond beside their names. If not, there would be no difference between a normal newbie and a moderator. There are enough guidelines in their cheat sheet on when to delete an answer. In this case, it clearer. Easy decision. The deletion didn't happen within minutes (there are instances where moderators deleted NAA within 2 minutes before it caught normal user's attention). There was time between answering and deletion. Besides this, this moderator is also the author of the question. So, he knows whether the question is addressed or not.

Just because he is a moderator, He should abuse his privileges ?

Other answer was deleted because there was no citations in the answer. There is no abuse of privilege here. Just a deletion of an answer which is according to site's policy.

You also said that you would not post answers like NAA but had to post it. You didn't edit with valid references even when I asked you to add more than once. So, I am surprised that you had posted a meta in spite of knowing that your answer was flagged and reason of deletion was given by me before deletion and moderator (at the time of deletion).

4
Why aren't all NAAs treated equally on this site?

6
Why was my this answer deleted?
1
Answer wrongly deleted - 5 [compromised]
4
Who can see other user's Deleted questions and how?
5
Can the mods go easy on declining flags on old unsourced answers?
1
Why is this short answer deleted though it is answering accurately?
0
If all answers are only perspectives, why are some users trying to delete answers they don't like?