Why is there selective deletion of comments challenging the moderators, especially one moderator 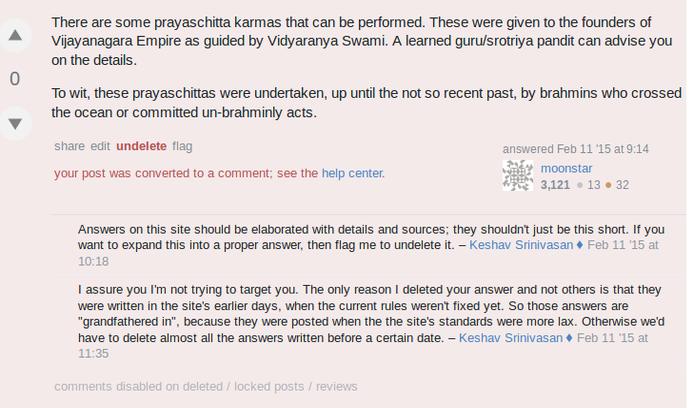 Clearly, there was a conversation between me and the moderator. All comments of mine challenging the moderator have been conveniently deleted by the moderator(s). Only their comments have been retained evidently to showcase their own virtue in this transaction. Without access to the entire conversation, it is impossible to understand that my comments were much more generalised about site rules and mod practices and were not limited to the post in question.

Note: I am not questioning the deletion of the post in the picture. Just the selective and utterly biased actions of the moderator(s). Many of my comments on several questions have been deleted, especially those that questioned this moderator.

Jeez, this site has not changed an ounce since I took a break from posting. Same old, different day.

I think this is more of a complaint rather than a question that can be answered.

For example "Why is there..?" can only be answered by that moderator who was involved.

What gives them the right to do so?

the answer is because he is a moderator he can delete as he is empowered to do so. Whether fair or unfair another issue.

Why and HOW are they still occupying the mantle of moderator?

I mean how can one answer this.. it can sound a bit harsh but is this the first time you have encountered a moderator whose workings have been unfair? I have seen many such moderators in other forums.

But, the problem definitely exists and i can say that from my personal experience.

Keeping exactly this issue in mind i had posted earlier this question - Can comments deleted by one moderator be restored by another?

So, from the answer it is clear, the other moderators can see all those deleted comments. If they also feel that deletion was unfair then they can restore the comments.

Or, if you yourself notice you can also raise the issue in the chatroom called "Moderation". The other moderators can then look into it.

Since, the mods are the only persons who can see the deleted comments, consulting them first (before posting here) makes sense. If the other mods also say that the deletion was fair according to them too, then of course posting here is the solution.

But, the real problem here is that we can't really know when our comments are getting deleted. So, it is fairly cumbersome for us to keep a track of the situation (by going to the "all action" tab we can check but that's exactly how it is cumbersome).

Here, i have just given a practical solution for the problem. IMO, situation is not that bad now, like how it was previously, when there was only one decision-making mod. As i have seen one mod (of the current group) undoing what was done by another on several occasions. So, we can expect fair moderation now.

5
When we have complaints against moderation is raising a meta the only or recommended solution?
4
Can comments deleted by one moderator be restored by another?

9
Voting to have Keshav Srinivasan take a sabbatical as a moderator
4
Why is there a minimum word count requirement to answers? And yet another instance of unfair moderation
2
Is the moderator justified in deleting this answer?
11
Moderating for knowledge, not truth
6
What do we do with the comments which give wrong information and posted on wrong assumptions?
2
Let the users know why a notice is put on their post.
14
2021 Moderator Election Q&A - Questionnaire