Political and Scientific questions are off-topic for Hinduism SE

Recently, a user posted these questions:

Here, I would like to point out that asking questions of political nature and asking scientific reasons behind Hindu rituals should be considered off-topic.

Regarding the first question, user may think that they are being on-topic because they are discussing Hindu saints, however, if we look at the question body, it's asking for a political reason which is not good for the site.

Reasons for disallowing such questions are:

It will lead to:

Coming to the second question, asking for scientific reason should be considered off-topic as well since we are here to discuss Hindu culture, tradition, gods, stories, etc.

Why should we disallow science-based questions?

...is fine and should be allowed as it expects a traditional answer from Hindu scripture, but a question like:

...should be considered off-topic as it forces users to engage in scientific speculation. So, in this case, users should flag or cast a close-vote ASAP.

The on-topic page has been now been updated to reflect the above:

Please note that the following subjects are considered off-topic here:

Political questions are rightfully off-topic. There is a site for Politics.

Screenshot of what I meant: 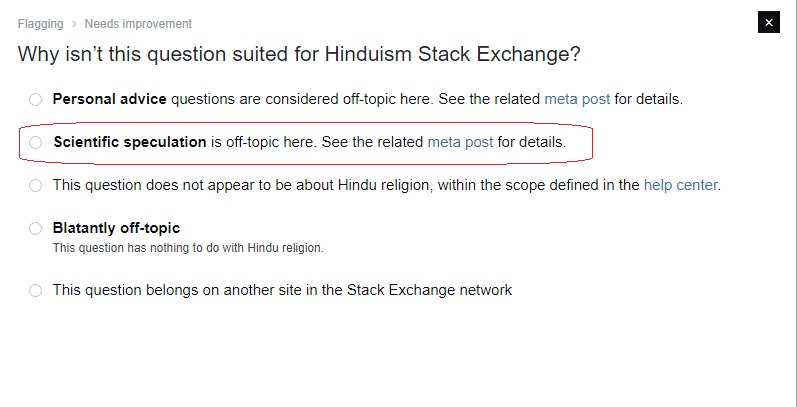 I think they should be addressed on a case-by-case basis. Some of these questions may indeed have proper answers.

Not the answer you're looking for? Browse other questions tagged discussion faq scope asking-questions .

15
Users asking for scientific answers / reasons
16
Define Off-Topic Close Reasons
11
Where is the Hinduism SE FAQ?
6
Should this bounty be canceled and returned to the user?
18
FAQ Index for Hinduism Stack Exchange
5
Is Logic and Science really off topic for Hinduism Stack Exchange?
2
Whats the real reason my answer was deleted?
4
Asking for stories related to temple history. Is it on-topic/off-topic?
8
An edit proposed to the on-topic page of our help center
4
Bountied question expecting answers with "science behind religious beliefs and practices" an okay trend?
See more linked questions

4
Should questions about the science behind rituals be off-topic?
4
Can we question about Hindu traditions?
16
Define Off-Topic Close Reasons
13
Asking for help / solutions to solve personal issues should be considered off-topic
8
How should we handle answers with partial scientific speculation and/or partial answers which are not from Hindu perspective?
5
Is Logic and Science really off topic for Hinduism Stack Exchange?
4
Bountied question expecting answers with "science behind religious beliefs and practices" an okay trend?