What is the site policy for comments used to attack authors?

This from an answer written by a mod a few days ago:

Even comments should be used only for asking clarifications and suggest corrections on posts (questions and answers) and many comments become obsolete when they serve their purpose. If users want to discuss any topic, they may discuss in chat rooms.

And this is a comment which did not add anything useful to the post and it's clearly attacking an Indian author for his views:

Whatever the answer to this question is. I recommend every sincere seeker of Hinduism not to read Devdatt Pattnaik or see his videos. Its nonsense to say the least. He is highly influenced by western indologists like Wendy Doniger. There is a video on youtube exposing Pattnaik.

I flagged the above comment with the following reason.

This comment doesn't add any value to this post. It's only purpose is to denigrate a scholar whose views the user don't agree with. This is exactly how personal attacks start in comments.

Why was my flag declined? What is the official policy with regard to comments like the above? Should we or should we not flag such comments?

After reading this comment, I realised that the flagged comment in main Qn, is indeed a poorly written, probably unintentionally. Either the comment should be deleted or edited by a Mod.

The comment doesn't use any derogatory term, but yet it's not a proper way of criticism. For example, Shila Prabhupada's translation on Gita has lots of translation mistakes, but I cannot assert other users, to reject him. Our responsibility finishes at drawing a line, which is factual.

Imagine, how will we react, if comments are insulting Adi Shankaracharya or Ramanujacharya or Vivekananda. They were humans too & had their own philosophical interpretations, to which many subscribe and many reject.

There could have been better choice of words, which may read as:

Whatever the answer to this question is. I recommend every sincere seeker of Hinduism to see this video to be able to judge Devdutt Pattnaik's work fairly. It appears he has misinterpreted many things.

Denouncing authors whose claims are incorrect , whose research is inadequate and whose agenda is suspect is perfectly okay. The author has a viewpoint and the opposite-viewpoint-holder should be able to dismiss those viewpoints.

As explained in the article How to disagree well: 7 of the best and worst ways to argue, name-calling and ad hominem are the two worst kind of arguments or reactions to posts and comments. 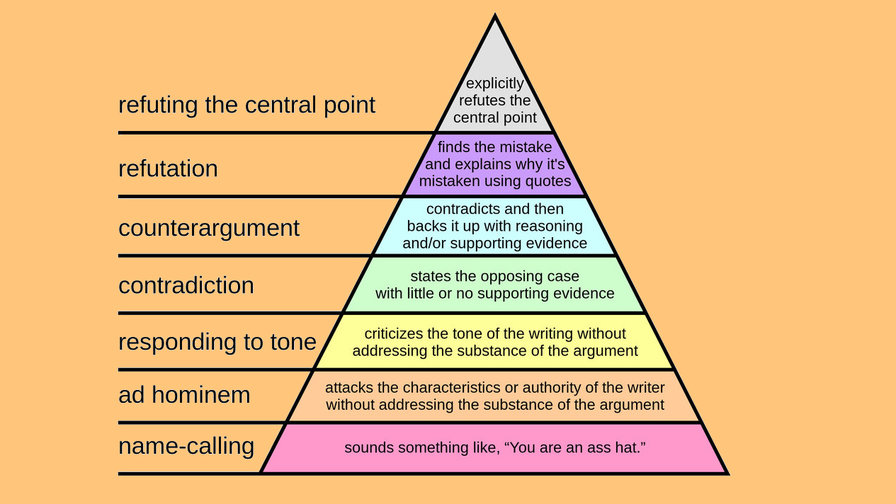 The comment that was flagged/declined clearly falls under the ad hominem kind.

Since this site is being considered for graduation, I suggest the site adopt higher standards. Even higher than the Be Nice policy. Respect and follow the Be Nice policy in both spirit and word. Lets not preach one thing and do something else in practice.

We do not want this site to become a battleground for Rajiv Malhotra and Devdutt Pattanaik fans. We already have YouTube, Facebook, Twitter, etc. for those kinds of activities.

24
Consider "Hinduism.SE" for the review towards the graduation process
21
Please stay away from Shiva vs. Vishnu debate
3
can we have a clear statement what constitutes Pramana for this board?

9
What exactly is a "wrong answer"? What is the official policy on handling wrong answers?
6
Can the mods go easy on declining flags on old unsourced answers?
4
Why was this flag declined?
13
Is posting several "trivial" questions in bulk encouraged for the site ? What’s the solution for it?
5
Why have the comments on this question been deleted?